While this may be nothing to the larger websites we appreciate your support.  When we started this we didn't think this milestone would be reached so quickly.  Thank you readers!!!!

Today the Fantasy Boyz are focusing on starting pitching.  In many leagues the pitching position is neglected.  The Fantasy Boyz want to make sure that our readers don't make this same mistake.  We feel the best rosters are ones that are well rounded.  While most leagues do favor hitting overall a team that forgets to add quality arms is not one that will succeed.  The Starters are much like Outfielders in the sense that there is so much quality out there.  Our rankings slate how we will pick in our upcoming drafts.

The top ten is easy lead by Justin Verlander, Clayton Kershaw and Roy Halladay but you make your money in the middle rounds.  Guys like Tommy Hanson, Josh Johnson, and Adam Wainwright will carry your pitching categories and won't cost you a top 2 selection.  Yes we know Johnson and Wainwright are coming off major injury.  Well the Fantasy Boyz are risk takers and we aren't afraid to add talent to our roster.  We hope you follow suit

Steer Clear:
Ubaldo Jimenez - Hasn't been the same since first half of 2010

Michael Pineda - Will he be able to handle the Bronx pressure?  Let someone else find out 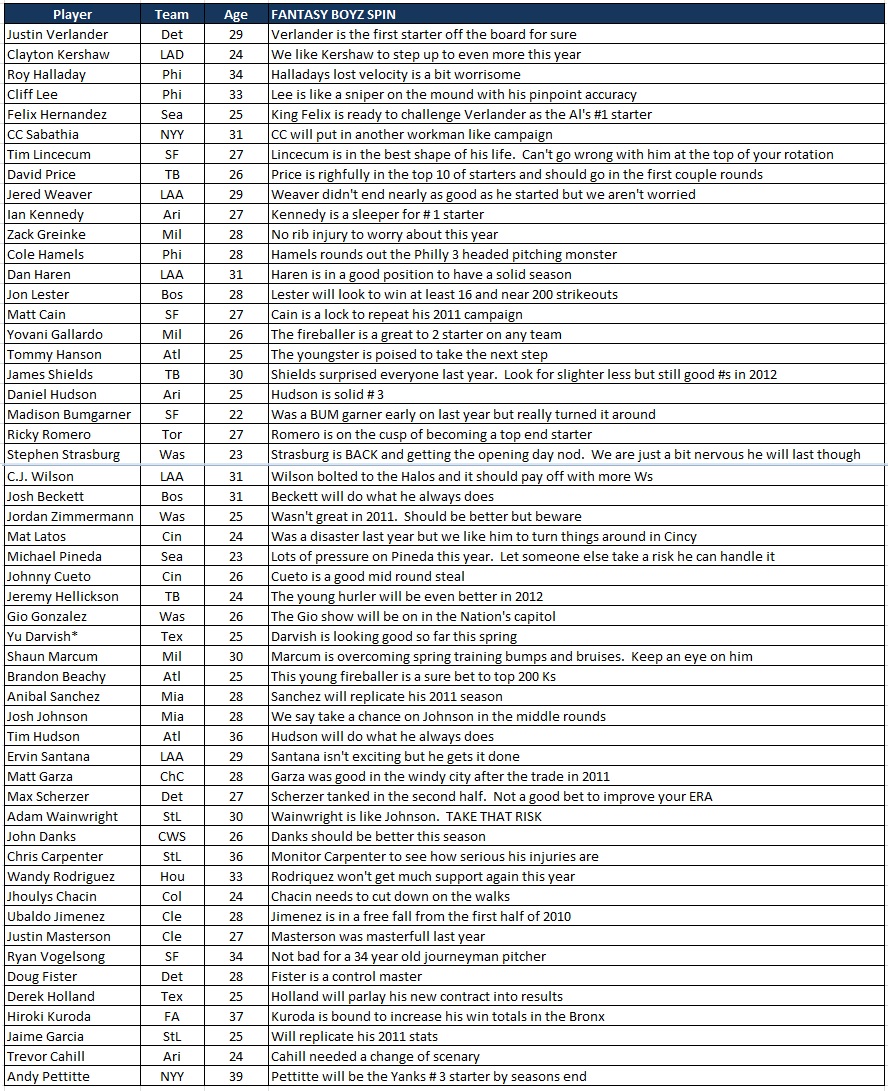 Posted by FANTASY BOYZ at 12:31 AM No comments:


While many of the infield positions are low on top level talent the Outfield position is chalk full of studs.  Matt Kemp and Ryan Braun lead this group.  You could make a case for either player as the #1 overall player selected in your draft.  As you continue to scan the list you will see players such as Curtis Granderson, Jose Bautista, Justin Upton, and Jacoby Ellsbury.  Any one of which has a chance to carry a fantasy baseball roster.  It is also filled with young guns like Giancarlo Stanton, and Desmond Jennings.  Our strategy in most drafts is to hold off on the Outfield position as you can grab difference makers like Matt Holliday, and Shane Victorino in the mid rounds.

Sleeper Candidates:
Desmond Jennings- This youngster has all the tools to be a 5 tool stud.  In a small sample size last season he was dominant.

Steer Cleer:
Josh Hamilton- Back on the sauce and is always injured.  Let someone else grab him early

Jason Heyward- Sure to be drafted way too high.  Hasn't shown us why yet on the field

Nelson Cruz- Another china doll.  Don't let him sit on your DL. 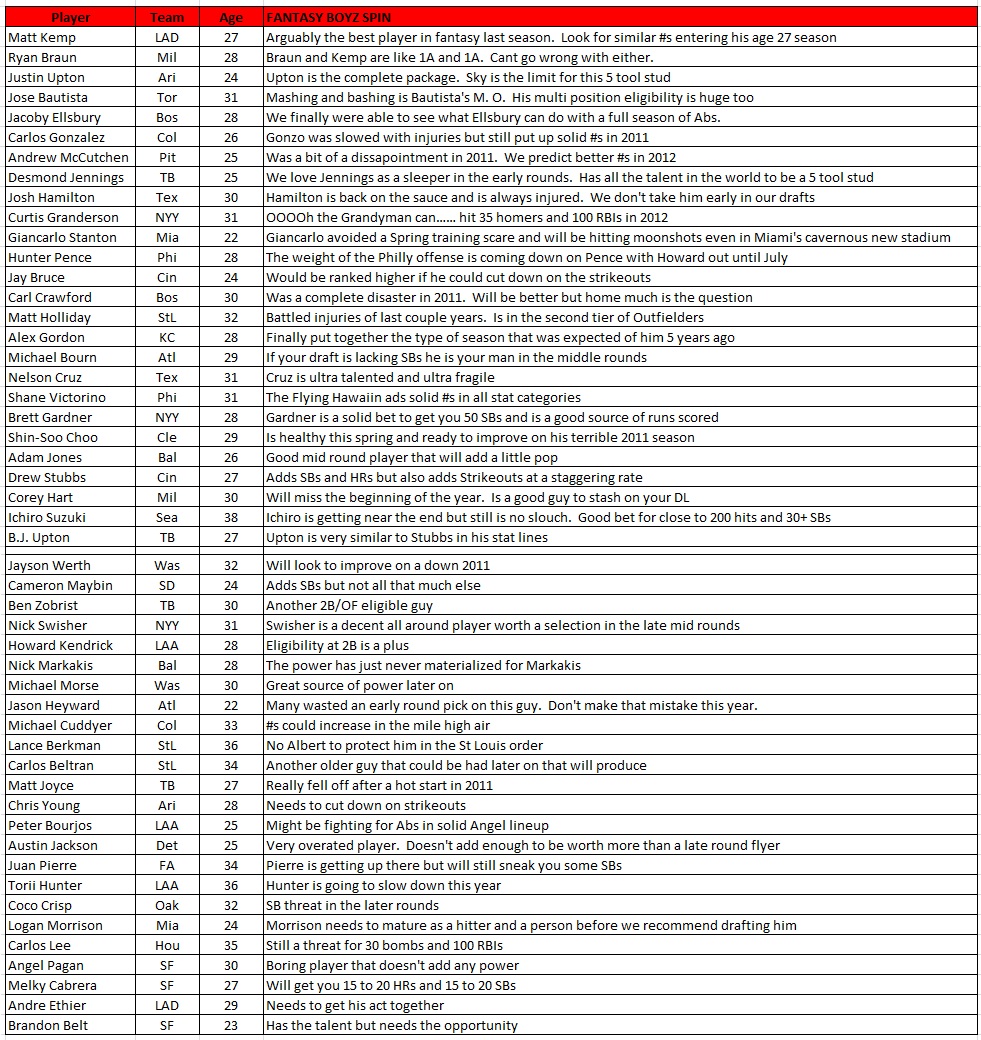 Posted by FANTASY BOYZ at 4:57 PM No comments:


Unlike our past two rankings the Third Base position is chalk full of solid players.  We feel the position is ten deep with difference making players.  We have no issue whatsoever with waiting on a third baseman while gobbling up other weaker positions.  The cream of the third base crop is Evan Longoria, followed closely by Mega Masher Jose Bautista.  Either player would look great in your everyday lineup, but we like Longo just a bit better as he has it all.  Barring injury he is a possible top 5 guy overall.


SLEEPER CANDIDATES:
Brett Lawrie -  This young gun is full of talent and was lights out in his stint with the Jays last season.


Pablo Sandoval - He has Lasik in the off season and was already coming off a fine season.

Mike Moustakas - Lit it up at the end of last season and is unquestioned starting third baseman in KC.

STEER CLEAR:
Mark Reynolds - Is an all or nothing guy.  Kills you in strikeouts and average but doesn't even drive in all that many runs. 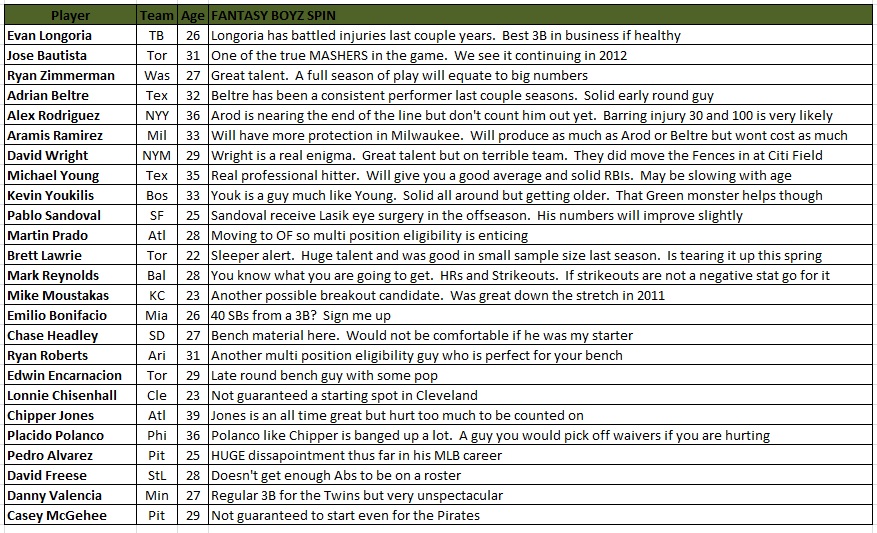 Posted by FANTASY BOYZ at 3:51 PM No comments:

Manning to be released......Sad ending to a great run

Word out of Indianapolis that Peyton Manning is to be released Wednesday.  While this should be a shock to no one it does signify the end of one of the greatest runs of one player with one team in NFL history.  It also puts the career of one of the greatest fantasy performers of all time in serious jeopardy.  Manning has helped win countless owners fantasy football immortality.  His release and unsure future are the sad reality that nothing lasts forever.  Sure Manning may go the way of Joe Montana and ends on a high note but 4 neck surgeries in the last year and a half just doesn't sound good to us.  Seeing Manning under center for the Jets, or Redskins makes me sick to my tummy.   Fantasy owners and NFL fans alike owe a great amount of gratitude to Peyton Manning for his work on Sundays.  It has been a great run.  Good luck in the future.
Posted by FANTASY BOYZ at 10:37 PM No comments:


Today's Fantasy Boyz rankings focuses on Shortstops, another position that is low on high end talent.  There is a clear big three in Troy Tulowitzki, Jose Reyes, and Hanley Ramirez.  After those players the drop off is substantial.  The next grouping is filled with some young guns in Starlin Castro, and Elvis Andrus as well as some wily veterans in Jimmy Rollins and Captain Derek Jeter.  In the exact same situation as Second Base if you don't get one of the top tier guys we advocate waiting to the mid rounds and fill out the rest of your lineup.  You could do much worse than grabbing a guy like Jhonny Peralta and beefing up the rest of your lineup and staff.  Keep an eye on a guy like Asdrubal Cabrera.  He finally put together a breakout season after a couple years of waiting on that talent.  While he isn't on the same level as a Tulo or Ramirez he is of the same mold and can be plugged into any lineup on a daily basis with great production.  We expect him to put together a similar year to 2011. 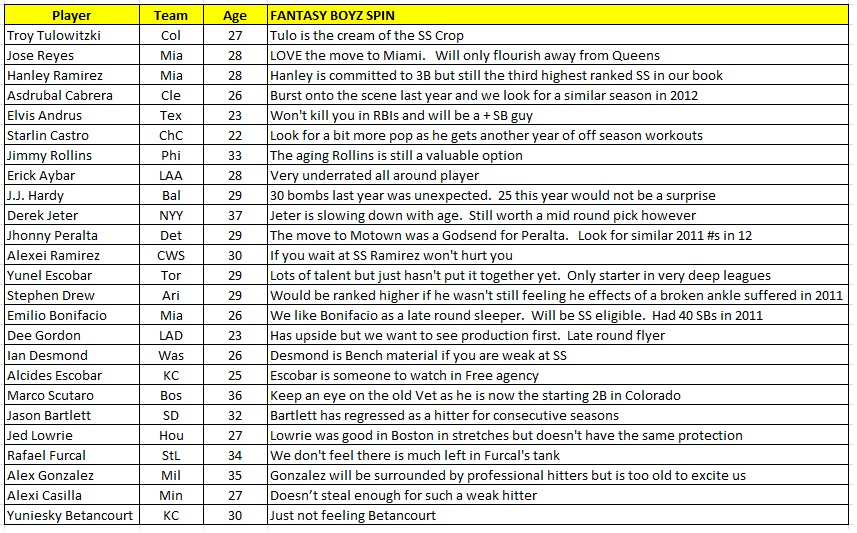 Posted by FANTASY BOYZ at 10:11 PM No comments: