As we get closer and closer to our favorite time of the year in Spring training we are going to focus today on the first base position.  First base is general one of your lynch pin offensive potitions on any championship fantasy baseball roster. We feel this years crop is 10 deep with legit MASHERS.  After that there is a definite drop off.  In that 10 there is also a clear top 5 of Albert Pujols, Miguel Cabrera, Adrian Gonzalez, Prince Fielder and Joey Votto.  Those guys are super studs that will most certainly be gone mid way through your second round.  Our second 5 of Paul Konerko, Mike Napoli, Mark Teixera, Eric Hosmer, and Carlos Santana contains some old dogs and a couple young guns.  Father time will catch up to Konerko someday but we don't think it will be this year.  Mike Napoli is an interesting option, coming off an amazing season and having dual position eligibility.  Teixera will continue to put up HRs, and RBIs in that powerful Yankee lineup.  We absolutely love Eric Hosmer this season, and think he will only build on his fantastic rookie season.  To round out the top 10 we bring you Carlos Santana.  Carlos moving to first base is the best thing that could have happened to the young slugger.  We love his increase power late in the season, with 12 bombs over his final 2 months.  Sky is the limit for the sweet swinging Santana.

Our advice is to get one of the above mentioned top 10.  Waiting on this position and trying to go the sleeper rout is a risky proposition in our opinion.  Let the other guys pin their hopes on the likes of Mark Reynolds, Ryan Howard, or Lance Berkman. 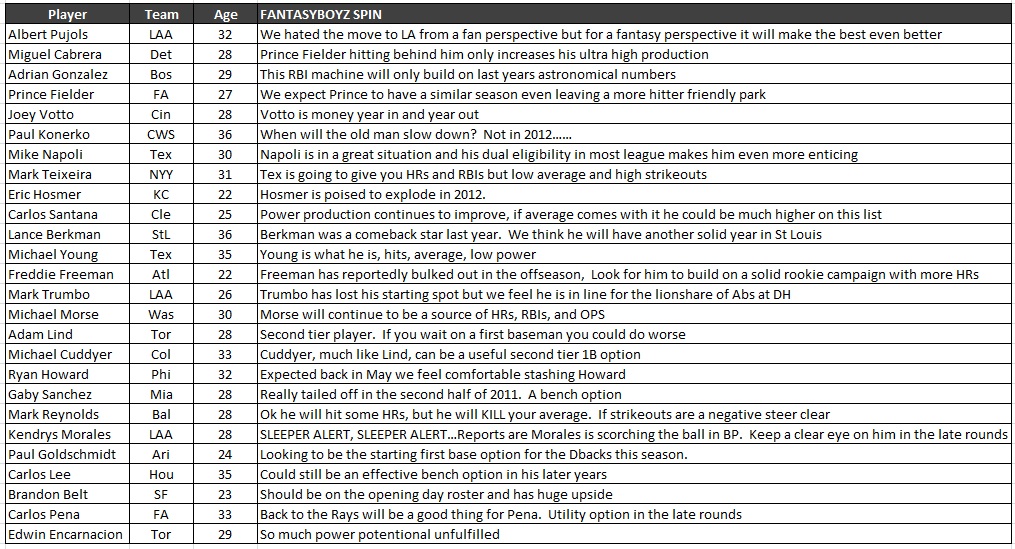