When looking at your lineups after your yearly draft may owners scratch their head with what they are going to do at Second Base.  There is not a long line of guys that you plug into your lineup and not worry if they will produce or not.  Outside of Robinson Cano and Dustin Pedroia there are questions surrounding almost every option.  Brandon Phillips is mad about his contract.  Ian Kinsler has had ankle problems, which he has supposedly had fixed with some kind of blood platelet injection.  Rickie Weeks has had ankle problems of his own.  The list of questions goes on and on, which is why we feel the value of Cano and Pedroia is so high is this years draft.  Sure they will not produce like the big time sluggers at first base, third base or outfield but those positions are much deeper in talent.  We have no issue with Cano going in the top 5 or Pedroia in the top 10.  For example if you are to grab Cano at 2 or 3 and then come back around with Teixeira in round two you are much better off than with a combo of Adrian Gonzales and Rickie Weeks or Dan Uggla.  Again that is just my opinion and you know what they same about those.   The fact does remain though that getting a Second Baseman that will contribute consistent numbers in 2012 is not an easy task. 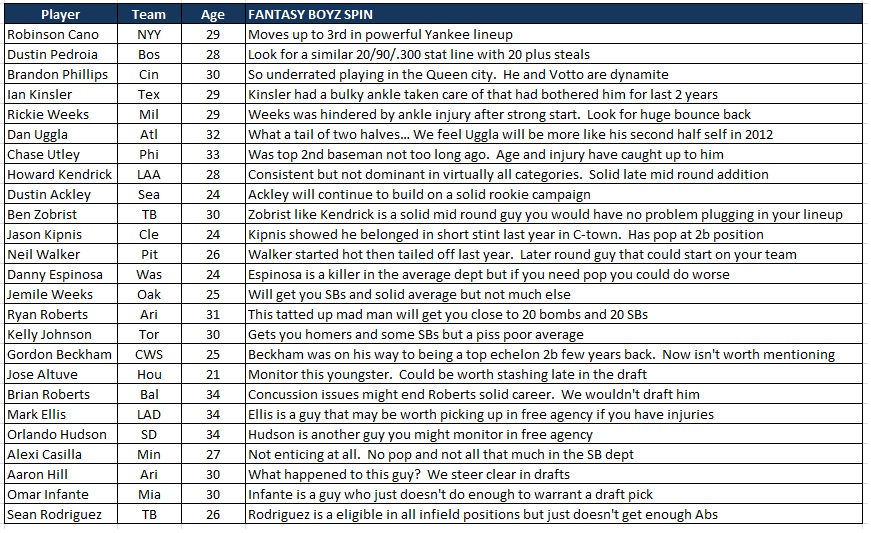